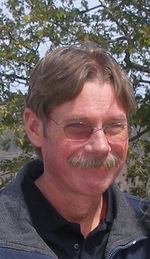 Chris moved from Rhinelander to Oshkosh, WI to attend the University of Wisconsin - Oshkosh, where he received a bachelor’s degree in Business. During his years at UWO, Chris also worked at the nearby Library bar. There he met the coworker who would become his wife, Kathy (Bucher) Marshall. Chris and Kathy, who were married on May 19, 1984, were known by friends and coworkers as the Library Lovers.

Chris was a family man who enjoyed spending time with his loved ones first and foremost. He often spoke of fond memories of his family, such as grouse hunting with his father in Rhinelander. Chris cared deeply for his children, Jared, Adam, and Kai, and loved attending their football and baseball games when they were younger. Always concerned with their wellbeing and wishing the best for them, he remained a strong presence in their lives as they grew into adults. When the weather permitted, he was eager to spend time with family while cooking his famous chicken or ribs on the grill. He always looked forward to social events with family and friends, such as 4th of July celebrations in Red Granite; dinners known to the family as M&M nights; weekend gatherings at his brother Dan’s cabin; Christmas celebrations; a good game of cribbage (we know who won the most!); and every Rolling Stones concert he could possibly attend.

The light of Chris’s life in his final years were his two grandchildren, Maverick and Annabelle. A day he spent with them was a day full of joy, and he treasured each of them. While the rest of Chris’s family was able to spend many happy years with him, that time for his grandchildren has been cut far too short.

He was preceded in death by his daughter, Amber; father, Glenn; and father-in-law, Gerald.

Due to the pandemic, a celebration of Chris’s life will be held at a later date, when the family and friends are all able to celebrate together.

In lieu of flowers, a memorial fund has been set up for Chris’s grandchildren, Maverick and Annabelle at the funeral home, so that his memory may help support them in their bright futures.