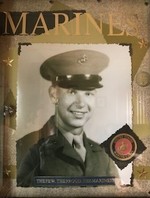 In loving memory,
Dale Dwyane Schumacher passed away peacefully at age 87 on April 29, 2019.
Dale is survived by his wife, Delores Schumacher; son, David Schumacher (Peggy Siekierke); daughter, Debra (Cris) Lemon; his grandchildren, Kailey Lemon and Spencer Lemon (Rachel Greathouse); great-grandson Oliver Lemon all of Oshkosh WI; and in-laws Edmund (Nancy) Ellis of West Allis WI. He is preceded in death by his parents, Leo and Ceceilia Schumacher; and brothers Neale and Lyle Schumacher also of Oshkosh WI.
Dale was born March 7, 1932 in Oshkosh. He served in the marine corps from 1952-1954. He married Delores Ann Ellis, also of Oshkosh on September 18, 1954 and worked for Schaffer’s sausage Co. for many years. He ended his working career as a maintenance man and groundskeeper for the City of Oshkosh.
Dale enjoyed reading, woodworking and working on his house and family cook outs. He will be remembered as a loving husband, father, grandfather, and most recently a great-grandfather to Oliver. Dale will be greatly missed but never forgotten. Services provided by Fox Cities Funeral and Cremation.