Obituary for David A. Hayford 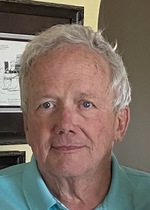 David Hayford of Oshkosh, Wisconsin passed away on Wednesday, August 4th of 2021, at the age of 74. After a recent diagnosis of cancer, David passed peacefully surrounded by his family.

David was born in Manchester, Connecticut on October 15th, 1946, to father John Enoch Hayford and mother Anne Weniger. He is survived by his wife, Paula, sons Kevin (Ashley) and Brian, daughter Erica (Justin) Johnson, and grandchildren Alex, Cullen, Declan, and Madigan. He is further survived by sisters Joanne and Nancy, and many nieces and nephews. He was preceded in death by his father, mother, and brother Jack.

David served in the U.S. Navy achieving the rank of Lieutenant supporting the efforts in Vietnam aboard the USS Coral Sea. He was awarded the Vietnam Campaign Medal, the Meritorious Unit Award, and National Defense Service Medal. David then returned to Wisconsin to earn his M.B.A. from Marquette University.

David and Paula would settle in Oshkosh where they raised their three children. David devoted himself to his family, his faith, and his community. He was well known in Oshkosh as an exemplary man of true integrity, honestly, and genuine kindness. Some of his most notable accomplishments included editorials for local newspapers, membership in both Oshkosh Southwest and Downtown Rotary Clubs, where he was a two-time Paul Harris Fellow, Day by Day Warming Shelter, HOME organization and service to his church, Emmaus Ecumenical Catholic Community, and of course, his involvement in his award-winning Rotary chili cook offs.

David was a loving father. He exemplified humility, courage, honesty, compassion, and kindness. He and Paula raised a close knit, loving family, who will continue their traditional “Soup Sunday” meals and creating memories.

David’s kindness and warmth radiated to all who where fortunate enough to encounter him, evidenced by his large circle of friends, new and old. He will be dearly missed by many.

Special thank you to Dianna Malkowski, PA-C and Moments Hospice.

Visitation for David is planned for Friday, August 13 from 1 to 3 PM at St. Paul United Church of Christ, 1950 Leonard Pointe Rd. in Oshkosh. The Memorial Service will follow immediately at 3 pm.

People wishing to honor David’s lifelong commitment to family and community can make donations to Day by Day Warming Shelter of Oshkosh.