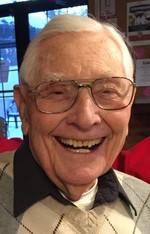 Donald Frances Johnson died February 16, 2020. He was born February 8, 1925, to Arthur and Theresa (Hunt) Johnson on the family farm in Winneconne, WI. Don grew up in Winneconne, enlisted in the Marines weeks after Pearl Harbor. He married Ethel Mae Peterson on October 26, 1946 and embarked upon a career in telecommunications. He began as a lineman in the days of party lines and finished in the age of fiber optics and satellite systems. He grew with the technology. The breakup of the Bell System allowed him to retire after 30 years and to launch a career as a freelance consultant. Don loved the challenge and developed clients throughout the U.S
Don was an avid outdoor sportsman throughout his entire life. He grew up hunting on his grandparents’ farm and fishing the Fox River across the street from his house. As an adult, he hunted fowl and deer locally, elk in Wyoming and Montana, buffalo in Canada and Russian Boar in the UP. He was a member of Challenge the Outdoors in his senior years and continued to enjoy fishing and hunting throughout his 80’s.
He loved to travel, taking his children on annual vacations via the family station wagon. After that era, he and Ethel enjoyed vacations and often visited their children and their families. Don, by all definitions, was a family man, gregarious and demanding to a fault of himself and his family. His zest for life set the example and expectations were high. No one told him, however that each child arrived with unique abilities and personalities! Ask, and each will have a different account of life with father. He did his best and was quick to credit Ethel for her unlimited love and patience. The sons and daughters followed their dreams as he had. He could not hold a grudge for long, paid his bills, was reliable and unfailingly optimistic.
The Elks Club was a prominent part of his life and he treasured those relationships. He held every elected position, including Exalted Ruler, championed improvements and supported community charities. Don enjoyed public speaking and was good at it.
He was preceded in death by his parents, beloved wife of 64 years, Ethel, son Bruce, granddaughter Melissa Johnson and sister Evelyn Johnson. He is survived sons, Gary (Susan) of Port Orange. FL, Steve (Shirley) of West Bend, WI, Brian (Marion Evison) of Palo Alto, CA, and Jeffrey (Jane Rusch) of Wausau WI; daughters, Karen(Cliff) Llewellyn of Corvalis, OR, Christine (Scott) Gottgetreu of Brighton, OR, Kimberly (Mike) Brown and Gina (Eduardo) Brecino of Westfield, IN; grandchildren, Roxanne Johnson, Eric Johnson, Dr. Kelleen (Rob) Maddill, Jennifer (KB Khang) Johnson, Patrick Johnson, Ryan Johnson, Timothy (Rachael) Gottgetreu, Jason (Alicia) Gottgetreu, Devan (Liz) Johnson, Allie Johnson, Riley Johnson and Alexandra Brown. He is furthered survived by ten great-grandchildren.
He was a life-long member of Most Blessed Sacrament Parish, St. Peter Catholic Church, 435 High Avenue. A Mass of Christian Burial will be held on Friday, February 21, 2020, at 1:30 p.m. with Fr. Jerry Pastors celebrating. A time of visiting and sharing of memories will be held at the church on Friday from 12:30 to 1:30 pm. Full Military Honors will follow the church services.
His children honor his life, his struggle and the example he set. He was a force. The family would like to thank his companion, Lois Nickle and her family, friends Mike, Darla, Vickie and Walt and the staff at Oakwood Manor for the support.