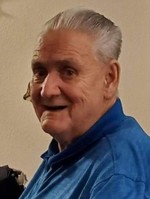 Reverend Edwin Lee Gaines, Sr, age 77, was taken to his heavenly home after a long battle with kidney disease. Edwin was born in Beloit, WI on February 2, 1945 and died on April 5, 2022 in Oshkosh, WI. Edwin spent most of his life as an ordained minister, pastoring churches in Antigo, Waukesha, and Oshkosh, WI. He loved hunting, fishing, preaching and spending time with his family. He was preceded in death by his parents: William Gaines and Muriel Knuth; siblings: Viola, William, Francis and Dwelly and son-in-law Steven Almandi. He is survived by his children: Janis Almandi, Shelley (Don) Rios, Tina (Kirt) Anderson, Edwin Jr (Monique) Gaines, Sarah (Brian) Krause and Rebecca (Sindie) Schmitt; his brothers: Richard and John Dietzman. He has 22 grandchildren and 19 great-grandchildren. We would like to thank Aurora Health Center, LakePointe and Edenbrook for their care for our dad during his last years. And a special thank you to Davida Dialysis - our dad considered you part of his family and spoke very highly of you all.