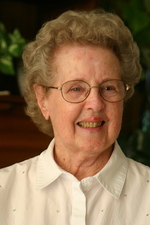 Esther Marie Mozingo passed away peacefully on April 8, 2020, at Evergreen Manor in Oshkosh just two months short of her 99th birthday. Esther was born in the family home on June 9, 1921, in Ankeny, Iowa to Iva and Albert (Mac) McMurray. Her school years were spent in Patterson, Iowa, where she graduated High School in 1939 (in a class of 9). She became the wife of John E. Mozingo on August 16, 1941, and they shared 54 years together until his passing in 1996.

During her life, Esther lived in Iowa, Arizona, Arkansas and for the past 12 years in Wisconsin. Family always came first for Esther. She was a devoted wife, mother, grandmother and great-grandmother. Esther always had a positive attitude, a smile on her face and compassion for others. She was a talented athlete who played golf regularly until she was 80. As a young woman she won her golf league title 5 years in a row, played basketball, baseball, and was an avid walker. She loved to read Christian novels and work jigsaw puzzles. She was a talented seamstress, needle worker, crafter and quilter. When she could no longer sew or do needlework, she tied more than 200 quilts for the Lakeside Quilters Guild.

Esther’s family would like to thank the members of First United Methodist Church in Oshkosh for welcoming her into their congregation, especially the ladies of Miriam’s Circle. The family also wants to thank the kind, compassionate and patient staff at Lakeshore Manor and the exceptional caregivers at Evergreen Manor who tended her in her final days. And a special Thank You to Mary and Cindy from Aurora Medical Center whose guidance helped Esther and her family navigate the final week of her life.

Esther is survived by her son John (Lynn) Mozingo of Oshkosh and daughter Sheryl Christensen of Grimes, Iowa. She is further survived by two grandchildren, Shelby (Michael) Moersch of Katy, Texas, and Adam (Monica) Christensen of Urbandale, Iowa, along with 4 great-grandchildren, Ava, Andon, Cole and Graham.
She was preceded in death by her husband, parents, infant brother Chester and two brothers, Wayne and Bob McMurray. Her family is comforted to know that she is now with them in Heaven.

A private family service will be held in Iowa at a later date.