To share your memory on the wall of Harvey Moss, sign in using one of the following options:

Print
Harvey Albert Moss III passed away at age 79 on February 19, 2021 at home with his loving family by his side.

He was born in November 1941. He graduated from the Brown Institute in 1967 and became an on air personality at several radio ... Read More
Harvey Albert Moss III passed away at age 79 on February 19, 2021 at home with his loving family by his side.

He was born in November 1941. He graduated from the Brown Institute in 1967 and became an on air personality at several radio stations in Minnesota and Wisconsin. He earned his Bachelor’s degree at UWO and taught journalism there. He held administrative positions at Mercy Medical Center, Ripon and Sheboygan Hospitals.

He was a proud veteran of the United States Air Force and an avid private pilot. Harvey was a member, volunteer and Young Eagles pilot at EAA for 50 years and reached the rank of Lt Col in the Civil Air Patrol. He was involved in many community projects and organizations. Harvey served on the board of the United Cerebral Palsy, Oshkosh.

Harvey shared his love of aviation with his children, grandchildren and great grandchildren at the EAA Air Venture for the last 50 years. He gave several of his family members their first private plane ride. He enjoyed reading and collecting books. He always tried to instill the importance of reading in his children and grandchildren. Some of his greatest memories were summer road trip vacations across the United States with his wife and kids. Harvey could never say no to his grandkids, whether it was one more story, a hot chocolate stop, or playing games. He was the person we all called for help and advice, knowing that we could always count on him.

A funeral service will be held at Appleton Alliance Church on March 5th at 11:00. We encourage social distancing and masks are required for those in attendance. Family and friends are invited to gather for a Celebration of Life and luncheon at The Whiting Boathouse, 98 Fifth St. Neenah, following the service.

Receive notifications about information and event scheduling for Harvey

There are no events scheduled. You can still show your support by sending flowers directly to the family, or planting a memorial tree in memory of Harvey Albert Moss III.
Plant a Tree

We encourage you to share your most beloved memories of Harvey here, so that the family and other loved ones can always see it. You can upload cherished photographs, or share your favorite stories, and can even comment on those shared by others.

Plant a Tree in Memory of Harvey
Plant a tree 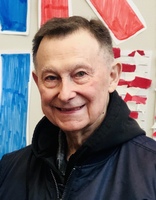