To share your memory on the wall of James Wiles, sign in using one of the following options:

Print
James Wiles, of Oshkosh reunited with the love of his life Marilyn, on January 19, 2020 after a long battle with declining health.

He was born to Claude and Myrtle (nee Brabazon) Wiles on November 4, 1935. James was a graduate of Oshko... Read More
James Wiles, of Oshkosh reunited with the love of his life Marilyn, on January 19, 2020 after a long battle with declining health.

He was born to Claude and Myrtle (nee Brabazon) Wiles on November 4, 1935. James was a graduate of Oshkosh High School, and married Marilyn Nitz in June of 1957. He retired from the U.S. Army as Sergeant first class after serving around the world in various duty stations. A Vietnam veteran, he was an air traffic controller in Plekiu Vietnam. His many hobbies include karaoke, movies, watching NCIS, and cooking but his greatest joy was spending time with his family.

Services with full military honors will be held at Fox Cities Funeral Home January 31 from 10-12.

James Lloyd Wiles was a man by cultures standards who was by no means wealthy but was so rich in those things that matter most. He served his country in multiple duty stations with the US Army as an air traffic controller. He had a faithful wife and 4 great kids, 3 who traveled with him to most stations as he served. Although he didn’t lay claim to it, he had an amazing voice and for many years sang with his brothers. For those of you who know, they had a sound like the Sons of the Pioneers. For those of you who do not know, please look it up online. I am sure there is enough information out there to fill you in. My husband and I were so honored to have them sing at our wedding reception. He was an awesome cook and loved doing so just to make his family happy. Mostly he just lived to give. He had the most amazing giving heart. I am not necessarily talking just about monetary things. I’m talking about whenever I had fallen apart whenever things were going poorly with Kevin’s health, he was always there. He would always listen and would always be ready with a hug. He was great for bouncing ideas off that others might think were ridiculous. He listened to multiple phone calls whenever being on the phone was not his most favorite thing in the world. He had a heart as big as Texas. Although there is more I could tell you, I will end with this. James Lloyd Wiles passed to his eternal reward on January 19, 2020.

Out of honor to him I copy this from I Corinthians 13: 4-7 “Charity suffereth long and is kind; charity envieth not; charity vaunteth not itself, is not puffed up. Doth not behave itself unseemly, seeketh not her own, is not easily provoked, thinketh no evil; Rejoices not in iniquity, but rejoiceth in the truth; Beareth all things, hopeth all things, believes all things, endureth all things.”

May we learn by his example. We could change the world.
Read Less

To send flowers to the family or plant a tree in memory of James Wiles, please visit our Heartfelt Sympathies Store.

Receive notifications about information and event scheduling for James

We encourage you to share your most beloved memories of James here, so that the family and other loved ones can always see it. You can upload cherished photographs, or share your favorite stories, and can even comment on those shared by others.

Bill and Peggy Seuffer sent flowers to the family of James Wiles.
Show you care by sending flowers

Posted Jan 30, 2020 at 07:28pm
Comforting thoughts and prayers for Jims family and friends. My our Lords peace surround you during this time. With love,

Bill and Peggy Seuffer purchased flowers and planted a memorial tree for the family of James Wiles. Send Flowers 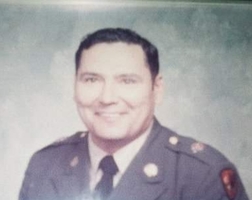