To share your memory on the wall of Jerry Krueger, sign in using one of the following options:

Print
Jerry L. Krueger, 79, passed away with his family by his side on Saturday, May 25th, 2019 at Park View Health Center.

Growing up Jerry was quite the athlete, winning several ice skating medals, playing football and baseball. But he was ... Read More
Jerry L. Krueger, 79, passed away with his family by his side on Saturday, May 25th, 2019 at Park View Health Center.

Growing up Jerry was quite the athlete, winning several ice skating medals, playing football and baseball. But he was also a rebel, driving motorcycles and getting himself into trouble. Jerry graduated from the school of hard knocks and married his high school sweetheart Susan J. Reynolds in 1961, children soon followed. That same year Jerry enlisted in the US Army, changing his life forever. He served overseas in Germany during the Berlin Wall crises. He reached the rank of SPC 5 and received an honorable discharge in 1964. He would proudly produce his DD214 if asked.

Jerry worked at Rockwell International (“the big outfit”) retiring in 1994 after 30 years and 6 months of service. He was a proud UAW member and always looked for the "made in America" label on any purchase. In 2007, Jerry was inducted into the Oshkosh West Athletic Wall of Fame for years of service, fundraising and coaching. He was also inducted into the Speed zone Walk of Fame in 2016, recognizing him for his years as a racecar driver, Barney's wrecker operator, flag man and fan.

Later in life, Jerry enjoyed fishing on Pioneer drive and his morning visits to Hardee's with his friends to solve the world’s problems and weekly Thursday breakfasts at Jackie’s in Winneconne or Mike’s Place in Oshkosh.

He was preceded in death by his wife of 56 years Susan, son Jerry, parents Walter and Ann Krueger, siblings Jim, Michelle (Cookie) and Joyce and his best friend Gerald “O’ Fish” Hensel.

Jerry's family will greet relatives and friends on Monday, June 3rd from 1:00-5:00 in the chapel at Lake View Memorial Park, 2786 Algoma Blvd, Oshkosh. Military honors will be presented at 5:00. In lieu of flowers, memorials will be forwarded to Oshkosh West Athletics and the Veterans Home at King.

The family of Jerry would like to thank the staff at Park View Health Center for the compassionate care given to Jerry during his time there.
Read Less

We encourage you to share your most beloved memories of Jerry here, so that the family and other loved ones can always see it. You can upload cherished photographs, or share your favorite stories, and can even comment on those shared by others.

Posted May 29, 2019 at 10:09pm
One of my favorite memories of Jerry was his hand shake. We always tried to see who could give the strongest hand shake. Of course he always won. I also always appreciated the crap he gave me about my Ford vehicles. Your will be missed dearly Jerry. Thank you for the memories. Toby Formiller
Comment Share
Share via:

Todd and Mary-- prayers for your family! An Oshkosh icon ❤ 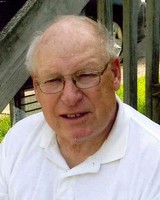