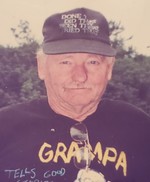 John N. Harrington, age 77, passed away at Mercy Medical Center on Tuesday, December 1, 2020 by receiving his final call for a job in Heaven. He was born in Oshkosh on February 5, 1943, the son of the late Lewis and Harriet (Weymouth) Harrington. At a dance, two wallflowers met and danced the rest of their life away. On August 8, 1964 he married the love his life, Diane Demler at St. John Catholic Church, Oshkosh.
John was known as one of the hardest working man around. It all began when he worked at two local sausage companies. He then put in over 45 years with Morgan Doors (Jeldwen). He is well known for all the side jobs he did throughout the City of Oshkosh, truly a “John of all trades.” While not working at these trades, John enjoyed playing pool, bowling, playing baseball, spending time at their land and spending time with family. He was also an honorary member of the Winnebago Land Marine Corp League and the Elks Club.
He is said to be a man of few words but full of strength and selflessness. A gentleman – but also as a “Gentle Man”. He will be known for these as well as his laughter.
John is survived by his wife, Diane; daughter, Christine (Jamie Kroll) Krause; son, Peter (Beckie) Harrington; grandchildren: Taylor “Taylor Morgan” and Ashley “Ashbug,” Krause, and Benjamen “Ben O Brown” Harrington; brothers: George (Shirley) Harrington and Steven and Bobby Harrington; sisters: Pat (Chuck) Nitz, Debbie (Tim) Liebert and Gail Lee; brothers-in-law: Jim Demler, Bob Demler and Ed (Terry) Demler; and sisters-in-law: Carla (Jeff) Haen and Mary (Norm) Saloman. He was preceded in death by his parents; brothers: Roger, Gary, Danny, Keith and Doug; sister, Betty Covey; and In-laws: Al & Alice Demler, Tom Demler and David Kuehl.
“Our father was a man like no other. He gave us life, nurtured us, taught us, dressed us, fought for us, held us, kissed us, but most importantly loved us unconditionally.
There are not enough words we can say to describe just how important our father was and what a powerful influence he always was to us.” (Christine and Peter)
A celebration of John’s life will be held at a later date.
The family extends a special thank you to the staff at Mercy’s ICU for their wonderful care and Fox Cities Funeral & Cremation Services.
They also extend special appreciation to those who have provided food, sympathy and support.