To share your memory on the wall of Karin Harrell, sign in using one of the following options:

Print
Karin M. Harrell, formerly of Soldier’s Grove, passed away peacefully at her home in Oshkosh on June 5, 2021.

Karin was born in Madison on September 21, 1942 to Della (Parr) and Kenneth Mathison. After moving to Bear Valley she attend... Read More
Karin M. Harrell, formerly of Soldier’s Grove, passed away peacefully at her home in Oshkosh on June 5, 2021.

Karin was born in Madison on September 21, 1942 to Della (Parr) and Kenneth Mathison. After moving to Bear Valley she attended Ithaca High School and graduated in 1961. She returned to Madison to attend LPN school where she met and married the love of her life, Joe H. Harrell. The two embarked on a life journey together which would take her to St. Simon’s Island and Jesup, Georgia before settling back again in Muscoda, WI in 1977.

In addition to being a full-time wife and mother, Karin worked at Marcy’s Café in Muscoda, co-owned and ran the Viking Shoe Store with her husband and was an EMT on the Muscoda Rescue Squad. She eventually landed at Advance Transformer in Boscobel where she worked for over 20 years. Taking early retirement, Karin once more pursued her love of care giving and completed her working career as a CNA at Schmitt Woodland Hills in Richland Center.

Karin was active in historical reenacting with her husband, Joe, and was known to many as “Ma Otter.” She loved to embroider, collect music boxes and snow globes, but her true passion was decorative pins. She had one (or more) for every occasion and often joked that they were her “burial plan” as the sheer weight of them, if all pinned on at once, would be sufficient to sink her in any convenient body of water.

She is preceded in death by her husband, Joe; brothers, Martin, and Darwin Mathison.

A celebration of life will be held at a later date.

The family would like to thank ThedaCare at Home and the ThedaCare Hospice for all their help.

As a good friend remarked: “I will find solace in imagining her in a breathtaking gown, waltzing away in the arms of Pa Otter, with her tender loving smile and magnolias in her hair.”
Read Less

To send flowers to the family or plant a tree in memory of Karin M Harrell (Mathison), please visit our Heartfelt Sympathies Store.

Receive notifications about information and event scheduling for Karin

We encourage you to share your most beloved memories of Karin here, so that the family and other loved ones can always see it. You can upload cherished photographs, or share your favorite stories, and can even comment on those shared by others. 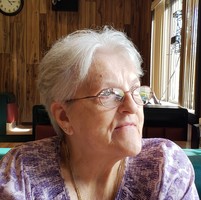