To share your memory on the wall of Butch Eckstein, sign in using one of the following options:

His journey began on September 17, 1947 in Oshkosh. Butch was raised in Oshkosh and made many lifelong friends here. After graduating from high school, he joined the Air Force, proudly serving for 13 years. While Butch travelled the world, he always called Oshkosh home. Butch settled back in Oshkosh after he finished his time in the Air Force. Butch then spent some time behind the wheel of an 18-wheeler and travelled the entire U.S. He then worked at the Post Office, where he retired in 2006. Butch was probably most known for owning and operating the Back Again Stadium Bar for over 30 years. He heartily shared his infamous stories and words of wisdom on both sides of the bar to any willing or unwilling listener. Some are still recovering.
Butch loved to be surrounded by friends and family and would often initiate motorcycle trips fully decked in his Harley attire, the standard Butch dress code. Destinations were irrelevant, sometimes short jaunts would do, but he relished the long hauls to Sturgis or Florida as well. He’d always manage to make his rounds to various restaurants and taverns, try his luck on the gambling machines, go fishing if he could dupe someone into taking him, take excursions to casinos or just sit at the Stadium and talk to his customers. He particularly loved going on Ratch’s bus to attend Packer games.

Although Butch tried to give the impression that he was as tough as nails through his colorful language and hard-shell demeanor, those who knew him best recognized his caring and sensitive heart. He sponsored fundraisers and donated his time and money to various causes including the United Veterans Honor Guard and other Veteran organizations. He was a lifelong member of the Disabled American Vets, the Marine Corps League and the Vietnam Veterans of America. He believed in the constitutional rights of the individuals he fought to protect, and he sponsored countless events to raise money for the less fortunate, a testimony of his gratefulness.

The family would like to thank Dr. Sahajpal and his team at St. Luke’s in Milwaukee; Dr. Bos and his team at Aurora Oshkosh; Hospice of Aurora; Mary, Brittney, KaBao, and Dr. Dar for all their support and care for Butch. He had a special relationship with each of them.

In true Butch Eckstein fashion, a party will be held rather than a funeral service. The party will be on Saturday, July 11th at Back Again Stadium Bar. Throughout his illness, Butch continued to show his strength and determination, never complaining even in the most challenging circumstances. Even though Butch may have taken a different highway, he knew he was a forgiven child of God and shared his hope of seeing those who were already waiting for him in heaven. He was ready to jump start the next road trip but was looking forward to a better driver at the wheel this time. Butch would want you to remember, “Don’t fear dying, fear not living. Let’s ride!” (Harley Davidson quote)
Read Less

To plant a memorial tree in honor of Butch Eckstein, please visit our Heartfelt Sympathies Store.

Receive notifications about information and event scheduling for Butch Eckstein

There are no events scheduled. You can still show your support by sending flowers directly to the family, or planting a memorial tree in memory of Butch Eckstein.
Plant a Tree

We encourage you to share your most beloved memories of Butch Eckstein here, so that the family and other loved ones can always see it. You can upload cherished photographs, or share your favorite stories, and can even comment on those shared by others.

Plant a Tree in Memory of Butch Eckstein
Plant a tree 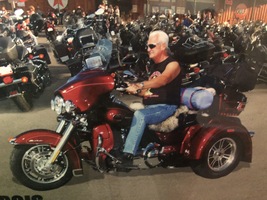