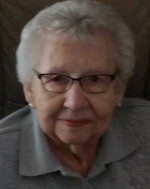 Mary Kathleen Fuller (Merk) passed away peacefully in her sleep on February 11, 2020 at Evergreen Manor. She was born to Hugo and Eleanor (Merten) Merk on October 20th 1928 and was raised on the family farm along with her siblings. Mary attended the one room Wood School, graduated from Oshkosh High School and started her working career at a bank in Oshkosh. That continued until on a blind date she met the man who would be her soulmate for the rest of her natural life. That man was Jack Fuller and on May 5th, 1951 they started what would become a 69 year journey through life together. It was not always smooth sailing in the early years as Jack served in the U.S. Navy during the Korean War and left his bride on a number of occasions for various deployments.
In their true Catholic faith, Mary and Jack started their family of five children and Mom became what has become the lost art of being a traditional housewife after the birth of their first child. She tended with loving care their small apartment and later their first home with the pride and joy she held for her family throughout her entire life. The often-mundane tasks of cooking, cleaning, doing laundry and ironing for a family of seven was never done with more vigor and pleasure than that of Mary Fuller. Regardless of the trips to the doctor, sick children, or whatever life threw at her, she managed the family seamlessly and tirelessly until ill health slowed her in her later years.
Her love for her husband Jack was the epitome and foundation of what a true marriage should be built upon. Through life’s ups and downs she stood steadfast by his side. The twinkle in her eye when she was with him sparkled until she could no longer fight, when God decided to take her until they meet again. Do not be sad for her leaving us, but rather celebrate a complete and fruitful life that was lived nurturing and caring for those she loved with every ounce of her being.
Mary is survived by her loving husband Jack; sons Steve (Stephanie), Jim (Diane) and Tom (Laurie); daughters Cindy Berg and Ellen (Jeff) Davis. She is also survived by her grandchildren and great grandchildren John, Brad (Beckie), Austin, Jorden, Todd, Sam, Alana, Eli, Maddie, Caleb, Jake (Haley), Reid, Jack, Luke (LeeAnn) and Zach, numerous nieces and nephews, and sister-in-law Maxine Merk.
Mary was preceded in death by her parents Hugo and Eleanor, brothers Hugh (Eddie) and Ken Merk; sisters Esther Desbrow and Jeanette Hoffman.
A private mass with immediate family will take place to honor Mary’s memory. A celebration of life for Jack and Mary will be held at a later date per Jack’s request.
The family would like to give a special thanks to the staff at Evergreen Manor View and Ascension Hospice RN, Ashley.
May the Lord bless you and keep you, may the Lord make his face shine upon you, and be gracious to you. May the Lord turn his face to you and give you peace
We love you!