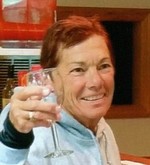 Patricia “Patti” Lynne Helein, age 65, passed away peacefully on July 1, 2019, at St. Elizabeth Hospital in Appleton, with her family by her side. Patti was born on September 15, 1953, in Menasha, the daughter of Elaine (Ackerman) and the late Edward Brantmeier. She graduated from St. Mary High School in 1972 and worked at various places throughout her life, always helping people, before retiring from Park View Health Center as a CNA. After retirement, Patti had the desire to continue helping people, so she became a crossing guard at South Park Middle School, always passing out treats to the students. If she noticed a child without mittens or a hat, rest assured the next day Patti would make sure the student would have the items they needed.
Patti enjoyed chocolates from Hughes Home Maid Chocolate Shop, collecting angels, gardening, pruning (sometimes too much!), and planting. She looked forward to taking care of her mother, Elaine, having wine with the neighbors, Pam and Frank Mezzano, talking and listening to stories with their kids, Murphie and MacKensie, and babysitting their dog, Mazie. She also enjoyed campfires with Terri Gohmann, spending time with Brad and Sarah Gallenberg (who kindly served as their wedding attendants) along with their four daughters, her sister, Diane Kolakowski, and brother, Rick Brantmeier. She also enjoyed gossiping with Karen Bartels and the girls at the tanning salon, riding her bicycle, taking care of her cats, Pixie, Jacob, Mickey, and Midnight, who kept her company while her husband worked (which was a lot!) along with spending time with her grandchildren, Maria, Faith, Nevaeh, and Blake. Patti looked forward to their trips out west to the National Parks on her Harley Triglide with her loving husband, Marc Oltra, 17 years of adventure together that will never be forgotten. Patti’s kindness and devotion touched many people along the way.
She will be missed by her husband, Marc Oltra; her mother, Elaine Brantmeier; her brother, Rick (Bobbie) Brantmeier; her sister, Diane Kolakowski; her son, Josh Helein; her aunt, Carrol Miller; grandchildren, nieces, nephews, friends, and neighbors. Patti was preceded in death by her father, Edward Brantmeier, and a brother-in-law, Jim Kolakowski. Forever moving, may you now rest in peace.
The family would like to extend a special thank you to all the staff at St. Elizabeth Hospital who helped Patti and her family, your loving care and kindness helped us all in our time of need. A private funeral will be arranged later.
“God needs Angels of all ages,” forever your sidekick, Marc.