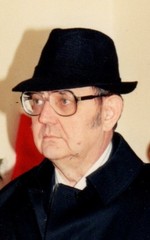 Robert W. Zier, age 84, of Oshkosh, died Saturday, February 22, 2020, at his home. Born on November 19, 1935, in Ashland, Wisconsin, the son of William and Helen (Ness) Zier. Bob left his hometown to enlist in the U.S. Army, serving from May 1955 to his honorable discharge in April 1957. Upon his return, Bob met his future wife, Mary Jo Bochinski, and they eloped to Indiana, marrying on April 13,1962. They later returned to Oshkosh to settle down and raise their family.
He was employed at various jobs, including bartending at the Triangle and various factory jobs, later retiring from Morgan Doors after 25+ years. Bob was quite the character, always had a story to share from his past interesting exploits. He liked to travel throughout the United States. A favorite story was the time he punched a donkey that started chewing on the mirror of his vehicle.
Bob was a collector of various items including beer cans, steins, and coins. He was an avid thriftier and flea market attendee. He spent many a Saturday attending the Princeton Flea Market. Family meals at home with his children and grandkids was a special time for Bob. He was affectionately known as “Boppy Ears.”
Survivors include his children, Timothy (Kay) Zier, Connie Zier, Robert (Gayle) Zier, and Joseph (Lisa) Zier; grandchildren, Cheryl Zier, Shaun Kalmerton, Kevin (Erica) Kalmerton, Gina Raschke, Robert Zier, Shawnna Zier, Rebecca Zier, and Keegan Zier; great-grandchildren, Alana Kalmerton, Matthew Miller, Landon Miller, Connor Raschke, and Alex Raschke; a brother, Kenneth; a sister, Helen; two sisters-in-law, Charlene Zier and Bonnie Bochinski; three brothers-in-law, Thomas (Linda) Bochinski, James (Judy) Bochinski, and John (Sue) Bochinski; and numerous nieces and nephews.
Bob is preceded in death by his wife; parents; two brothers, William and Raymond Zier; parents-in-law, Joseph and Marie Bochinski; two brothers-in-law, Gerald Bochinski and Joseph Bochinski; and a sister-in-law, Lois Bochinski.
In keeping with Bob’s wishes there will be no formal funeral services at this time and private family Celebration of Life Service with Military Honors will be held later. The family is deeply thankful for the response and care given to Bob by the Oshkosh Fire & Rescue, especially to Officers Rasmussen, Rennie, Sopata, and Achterberg. Your kindness will not be forgotten.