To share your memory on the wall of Sandra Skifstad, sign in using one of the following options:

She was born December 19, 1943 in Oshkosh to Austin and Elma Hasse.

She was born December 19, 1943 in Oshkosh to Austin and Elma Hasse.

Sandra was a part of the first graduating class of the new Oshkosh West High School, and married Elden Skifstad on August 25, 1972. She worked for many years at the Hostess Wonder Bread Store where she worked as a manager. Sandra enjoyed sewing, cooking, and spending time with her family.

Sandra is preceded in death by her parents, Austin and Elma Hasse; brother Ronald Hasse; and daughter, Julie Skifstad-Dodd.

Services for Sandra will be held at St. Johns Lutheran Church 808 N. Main St. Oshkosh, WI 54901, Friday November 8, 2019. Visitation will begin at 10am and last until the time of service at 11am. Plants or flowers in memory of Sandra may be delivered Friday starting at 8am.
Read Less

We encourage you to share your most beloved memories of Sandra here, so that the family and other loved ones can always see it. You can upload cherished photographs, or share your favorite stories, and can even comment on those shared by others.

Peaceful White Lilies Basket was purchased for the family of Sandra Skifstad.

Posted Nov 05, 2019 at 05:16pm
Please accept our most heartfelt sympathies for your loss... Our thoughts are with you and your family during this difficult time. With love and hugs.

Posted Nov 05, 2019 at 06:48am
Sandy was the kindest person I've ever met . No matter what she always seen the good in people. She was always willing no questions asked to go that extra mile for anyone . Sandy you will be dearly missed .
Comment Share
Share via: 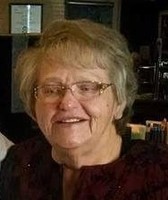