To share your memory on the wall of Scott Nigl, sign in using one of the following options:

Print
Scott A. Nigl of Oshkosh passed away unexpectedly as a result of his battle with alcoholism on Friday, December 4, 2020. He was born at Mercy Medical Center in Oshkosh on January 4, 1973.

Scott brought smiles and laughter to all that kn... Read More
Scott A. Nigl of Oshkosh passed away unexpectedly as a result of his battle with alcoholism on Friday, December 4, 2020. He was born at Mercy Medical Center in Oshkosh on January 4, 1973.

Scott brought smiles and laughter to all that knew him. He will always be remembered for his quick wit, spunky personality, caring heart, home fish fries, and state of the art procrastination tactics.

He attended Oshkosh North High School where he wrestled and met many of his lifelong friends. He most enjoyed hunting; ice fishing; fishing; boating; taking family four wheeling trips; being a handyman; and watching his grandpuppy, Midas.

Over the years, he spent time working at Mercury Marine, Bemis, Pro Ex Extrusion, and Team Winnebagoland.
He is survived by his partner, Shirley Hyde; his children, Alex (Samara) Nigl, and Brianna Nigl; his brother, Paul (Sandra) Nigl; his father, Lee (Patti) Nigl; his nephew, Brennan (Samantha) Pulver; his best friend, Jeff (Kalen) Ruck; and his grandchildren, Brentin, Eli, and Talia Nigl. He is also survived by his little snugglers, Kalle and Meko.

Scott is preceded in death by his mother, Kathleen (Hinz) Nigl and his faithful Labs, Teah and Maggie.
The family would like to thank the EMTs and staff of Aurora for their kind and gentle care.

A service for immediate family will be held, followed by a larger celebration of life event during the Summer of 2021.
Read Less

Receive notifications about information and event scheduling for Scott

There are no events scheduled. You can still show your support by sending flowers directly to the family, or planting a memorial tree in memory of Scott Alan Nigl.
Plant a Tree

We encourage you to share your most beloved memories of Scott here, so that the family and other loved ones can always see it. You can upload cherished photographs, or share your favorite stories, and can even comment on those shared by others.

Plant a Tree in Memory of Scott
Plant a tree 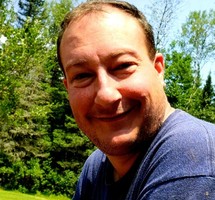