Obituary for Soren May 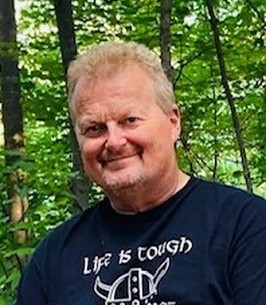 Soren May died peacefully at his home from Glioblastoma, surrounded by the love of his wife and children on December 29 2021. Soren was born in Frederiksberg, Denmark on August 16, 1957. His family immigrated to the United States when Soren was 3.

His younger days were filled with adventures as his family traveled all over the United States wanting to see the beautiful country where they were to become citizens. His favorite activity was camping at Starrett Lake in Sayner, WI.

He had tons of fun living and growing up on Bellhaven Lane in Oshkosh.

He loved being close to the lake, going to the sandpits and just being a kid. His family had a cat that would meet them at the bus without fail every day. Soren also had a pet raccoon named Herman that was so tame it would come in the house and Soren would take him everywhere, even the bank!

Soren’s work ethic started at a young age. He was a paperboy for many years with the Northwestern. He then worked at BigBoy and then started his career as a mechanic at 17, for Schuppe Auto in Oshkosh.

After that he moved on to Kolosso Auto in Appleton where he worked for over 20 years and completed his Associate’s degree in Auto Maintenance at Fox Valley Tech at night. After years of driving, he decided to find something close to home. He got hired at Oshkosh Tire and then was quickly promoted to being lead Mechanic at Safety-way bus. He took great pride in the fact that when state inspections came, he always had a perfect record. Knowing he had all those lives in his hands was a great responsibility and he was admired and respected by everyone.

When Cliffs Tire & Battery moved to Oshkosh Tire Soren was hired and spent the next 21 years as a Master Mechanic. He worked there until his illness in October 2020 forced him to early retirement.

Soren opted for Quality over Quantity with his Glioblastoma brain cancer knowing the odds of treatment were not in his favor.

Soren and Edie traveled and fulfilled a promise they made to each other over 36 years ago on their wedding day. To travel all 50 states together. Soren lived his bucket list every day. He never met a stranger that didn’t become his friend. Soren had a quick wit and was just downright funny and carried that humor with him through his entire life, no matter what. He was always there if someone had a problem with their vehicle. Soren was the man that when he saw someone on the side of the road, he would stop to make sure they were OK.

Soren loved his Harley Davidson and rode in many benefits, rain or shine and loved to just go where the rode took him. Harley riders know that you develop a family when you ride and that’s for life. He loved Road Trippin, didn’t matter where, just let’s go!

Soren became an avid fisherman and also loved camping and racing. For years he attended the Brickyard with his son, Travis.

You could see him at the races at Oshkosh Speedway with his friend of over 40 years Tim (Kathy) Fahley. When that closed, they went to Seymour on Fridays.

Soren’s biggest accomplishment in his life was his family. He was a father by example. He instilled that work ethic with his children and was so proud of not just their accomplishments but what amazing human beings they became.

Soren’s memory will be cherished by his soul mate and wife Edie; daughters, Laura (Craig), Chrystal (Daniel) May Cantilo; son, Travis (Anna); grandson, Dakota “Little Man” whom he had a special bond with since birth; and his faithful, loyal, canine pal, Willie.

He was preceded in death by his parents Inge & Arne May; uncle David and aunt Elsa Weborg; and nephew Jonathon Schultz.

The Family would like to thank Cliff’s Tire & Battery/West Side Tire, Dr. Daniel Kaiser, This Time Tomorrow Foundation, The Spierings Cancer Foundation, Heartland Hospice, and all the amazing friends who showed up in big ways to do whatever they could to help and support us in so many ways.

Soren’s celebration of life was his Life. As per his wishes no services will take place. Next time you have a drink Skoal to Soren.

We won’t be sad; we’ll be glad for all the life we had.
And we’ll remember when!