To share your memory on the wall of Raymond Bernier, sign in using one of the following options:

Ray developed his trade as a carpenter at a young age and he never stopped mastering it – he could build or fix almost anything. He did not have a lazy bone in his body and always had to be doing something. Ray loved tending his flower beds, sharing the harvest of his vegetable garden, carving totem poles, fishing and hunting. About 35 years ago, he purchased land in Iola, and most of the family worked under his direction to build a log cabin together. He also was an avid bowler as an Eagle’s Club member for many years. Marcella and Ray were long-time members of St. Josaphat’s church and later attended Sacred Heart Catholic Church.

A graveside memorial service will be held with family on January 29th at 2:30 PM at Calvary Catholic Cemetery. Ray’s great sense of humor will live on in all of our hearts. We will miss him dearly.

We would like to thank the wonderful, caring aides, nurses, and all of the staff at Park View Health Center. It was very comforting to have your compassion and respect for our father, especially during the difficult times of the pandemic. In lieu of flowers, Ray would appreciate a memorial to Rawhide Boys Ranch.
Read Less

To send flowers to the family or plant a tree in memory of Raymond Alexander Bernier, please visit our Heartfelt Sympathies Store.

Receive notifications about information and event scheduling for Raymond

We encourage you to share your most beloved memories of Raymond here, so that the family and other loved ones can always see it. You can upload cherished photographs, or share your favorite stories, and can even comment on those shared by others. 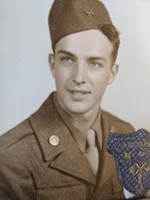