To share your memory on the wall of Garth Coates, sign in using one of the following options:

Garth worked as a carpenter with his father building houses in Oshkosh, a skilled trade he would later pass onto his sons. He worked for many years in the Chicago Painters Union as well. Garth was a man of very strong work ethic, and proudly did so his entire life. Even after retirement he never stopped to rest for very long. You could always find him fixing, building, or climbing something well into his 90s.

On October 10, 1950 Garth was united in marriage to Eunice Velie and together they raised nine children. Garth and Eunice always enjoyed family time. During the long winter breaks from carpentry Garth and Eunice would often take the nine children to Florida where they enjoyed spending time with grandparents. Garth also enjoyed taking his family camping and teaching them to cherish the simple things in life.

Garth’s family wishes to extend a heartfelt thank you, to the Heartland Hospice Nurses, CNA’s, and staff for their kindness and excellent care in his final days.
Read Less

To send flowers to the family or plant a tree in memory of Garth E. Coates, please visit our Heartfelt Sympathies Store.

Receive notifications about information and event scheduling for Garth

We encourage you to share your most beloved memories of Garth here, so that the family and other loved ones can always see it. You can upload cherished photographs, or share your favorite stories, and can even comment on those shared by others.

Tom, Payton,Kayla,Hailey,Katie,Addie,Jordy,Micky,Milo,Q, and other have sent flowers to the family of Garth E. Coates.
Show you care by sending flowers

Posted Mar 09, 2021 at 06:35pm
Loving Great Grandpa and Great Great Grandpa, you will forever be missed and always be in our hearts. 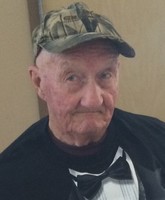